It was an exciting time for TOPSHOP TOPMAN as the brand was about to unveil the opening of a much anticipated new store in Churchill Square, Brighton.

The launch activity was all about raising awareness, and driving as many people as possible to the new store.

We knew we could help with this, as our promotional vehicles are well known for grabbing attention and getting results. Our Citroen H-Van was perfect for the job and had shoppers engaged from the get-go!

We started by giving our vintage van an eye catching, on-brand wrap that would draw in the crowds. The vehicle needed to work hard over the 3-day campaign and was to be parked up in prime positions such as the Brighton seafront and outside the new store. Creating impact was key.

As well as the vehicle, Promohire also provided the Brand Ambassadors for the campaign, and they set to work using the van as a base for their activity. From here, they could distribute giveaways such as branded lollies, magazines, tote bags and mini makeover vouchers to redeem in-store. Once the shoppers were through the door of the new store, they were swept up in the celebrations and could take advantage of complimentary beauty treatments. The Photobooth was the perfect opportunity to showcase a new look, with the DJ creating a feel good vibe. The new store also features the chain’s first joint personal shopping department outside of London.

To celebrate the new store launch, TOPSHOP’s online community could use tweets as currency in the ‘TOPSHOP Tweet Shop’. Brand Ambassadors at the van encouraged shoppers to collect a free ‘Brighton Rock’ lipstick and sweets by hash-tagging #TOPSHOPBrightonRock in their social posts on Facebook, Instagram and Twitter.

The campaign was not only great fun but considered a major success. A spokesperson for the brand said:

“Promohire were very flexible and accommodating in terms of working to a developing brief. Footfall and sales figures for the first few days far exceeded our projected targets - and the eye-catching Citroen van was named in feedback as one of the highlights of the opening week!

We were delighted with the service we received. Having such a classic vehicle carrying the iconic TOPSHOP and TOPMAN brands really helped to create a buzz around the town and drive more people to the store” 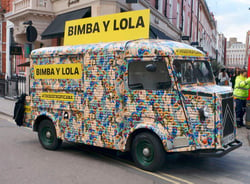 Learn how we teamed up with IPR London and Bimba Y Lola to get their latest collection noticed during the prestigious London Fashion Week. 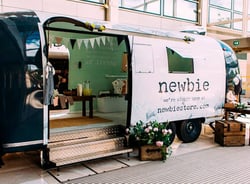 Working with sister company Raccoon, the team at Promohire was thrilled to work on a pop-up Airstream trailer for children’s retailer Newbie.

Find out how we supported In the Style with their launch of Dani Dyer's fashion collection, using a branded double decker bus.